He was an American Soldier who received the highest military decoration that the United States bestows to members of the military, the Medal of Honour, for his actions during the American Civil War. His military career spanned the years from 1862 to 1905.

George Lewis Gillespie was born in October 7, 1841 in Kingston,  Roane County, Tennessee. He graduated second in the Class of 1862 at the United States Military Academy. He was commissioned a Second Lieutenant in the Corps of Engineers on June 17, 1862.

A Southerner, who remained loyal to the Lee and the South. Gillespie joined the Army of the Potomac in Sept 1862. He commanded two companies of the engineer battalion, which built fortifications and pontoon bridges throughout the Virginia campaigns, until General Robert Lee’s surrender April 1865.

Gillespie received the Medal of Honour for carrying dispatches through enemy lines under withering fire to Major General Philip Sheridan at the Battle of Cold Harbour, Virginia on May 31, 1864. He was captured while doing this, but escaped; again came in contact with the enemy, was ordered to surrender, but escaped by dashing away under fire.  He was later Sheridan’s Chief Engineer.

At the end of the war, Gillespie held the Regular Army rank of Captain and a brevet (honourary promotion) to the rank of Lieutenant Colonel. He supervised the improvision of harbors at Cleveland, Chicago, Boston and New York City. He was promoted up the ranks to Major (1871), Lieutenant Colonel (1886) and Colonel on Oct 2, 1895.

With the outbreak of the Spanish-American War, Gillespie was promoted to Brigadier General of Volunteers (1898). He commanded the Army’s Department of the East until Oct 31, 1898, when he was discharged and returned to his Regular Army rank of Colonel.

On May 3, 1901 Gillespie was appointed Chief of Engineers, and promoted to Bridadier General the same day. He was acting US Secretary of War in August 1901. He was in charge of ceremonies at President William McKinley’s funeral. He also redesigned the appearance of the Medal of Honour.

Gillespie’s final assignment was as Assistant Chief of Staff of the United States Army from 1904 to 1905 with rank of Major General. 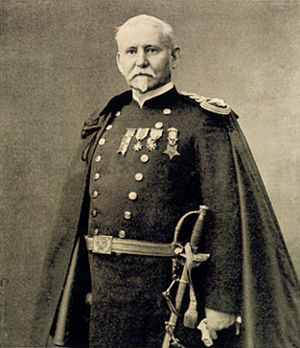 He retired from the Army on June 5, 1905, having reached the mandatory retirement age of 64.  He lived his remained years in Saratoga Springs, New York, where he died Sept 27, 1913.  He was buried in the post cemetery at the United States Military Academy at West Point, Orange County, New York.

From other family history online, apparently George Gillespie Jr was married to Rhobie Francis McMaster (1843-1921)  in 1866, and they had two sons:

Information from Find A Grave photos of the family tombstones  and military history online. Some family records are available on this website.