“I will give you a few hints in case you or yours cross the Atlantic. Bring a small  mattress with you, for the aching of the bones when obligated to toss upon a hard, uneven surface for some days is no trifling inconvience. My cold may have made mine more tender than usual. In the next place, bring a few basin cloths, for one is apt to look upon one’s washhand basin with perpetual mistrust.  Do not be quite dependent upon the packer’s library for reading.  I am glad that we are not so.  They are odd volumes, pages torn out, and the key sometimes not forthcoming.

I should strongly recommend avoiding a crowded packet-ship, and therefore one of great repute, or perhaps a packet-ship at all. A person should have health and spirits to stand the noise, the confusion and the merriment. There is certainly a great advantage in being able at all hours to call for anything gruel-tea, lemonade, sago or anything you can think of. Our tea, for instance is neither good nor hot, coffee better. Your dinner when brought to you may often be cold, and when your appetite is most delicte a greaet, big, fat slice may be sent to you.  These evils are worse. I said to one lady who had been at the table at least two hours, “I am sorry for your having such a tedious sit.”  “Oh, I like to sit, ” said she, and I have been eating all the time.” The dinner benches having backs, you cannot move without distrurbing several, unless you are lucky enough to get of the sofa corners where is no rest for the head, such as an elbow and hand can afford. We have great comfort from the spare pillows.

I generally contrive to get dressed in time for breakfast, which meal appears about nine oclock. The translantic ladies eat cold and hot meat, fried or pickled fish or oysters. To this first meal a cup of coffee and a crachers is generally mine. The eggs are dubious and your basket was a most wise and acceptable addition to our sea store on my father’s account.”

The family arrived in New York on June 18th, and Anne makes the comment:” Shall I give you a chapter on American hotels? Suffice it to say that I find reason in some respects to rejoice that we have been hardened by previous travel.”

After a few days in New York, where Mrs Langton could recover from the  voyage, the family began the journey to Canada via the Hudson River and Erie Canal. They left on July 3rd, and Mrs Langton wrote about this part of the trip: 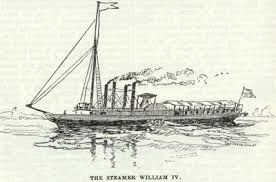 “3rd. Embarked in the Steam Packet which goes to Albany, but we determined to stop short half-way at West Point, a beautiful station, and rest there a day or two. The banks are very fine–some striking rocks and palisades, indeed all are fine.  The rive, too (Hudson) we admired. The Point has some beautfiful scenery. The Hotel commanded it on all sides, but we were taken aback by hearing we could only have one bedroom, though two had been spoken for the day before.

The house is quite full, many military, as tomorrow is the anniversary of the American Independende, always observed. This place is where the military college is situated.  The mountains are fine, which surround the view of the river. T. L (her husband Thomas Langton) thinks it is one of the loveliest spots he has ever seen. Anne made some sketching on a public table. TL got a small room, and we did very well with two beds. The weather was not very hot.

After a few days at the Point, they commented

6th.  We embarked for Albany in a New York Steam Packet about eleven. We found the Eagle at Albany very near where we landed–a most comfortable looking house. The rooms are very spacious, beds with beautiful linens, and after lying down to rest my poor head, I enjoyed a cup of tea with some fresh strawberries. The Hudson continued fine, the banks less bold but richly wooded down to the water. Many beautiful elegant looking villas with openings down to the river. It reminded us of Italy. They were all of pure white. The woods were of the freshest green and appeared not of old growth.  We stopped at many towns to take up or set down passengers-at all a busy shipping appearance.  Several towing steamers passed, which appeared to have on every side of them different sized vessels and crafts. We are now at Albany.

After a few days in Albany, the family continued on their way.

8th. I had not a bad night but felt scarcely up to 6 hours railway travelling, but we set out about half past nine and were so fortunate as to have the carriage to ourselves. The scenery in some parts is magnificent with the interminable forest, which now becomes visible and reminded us what we were to expect at Blythe.  They have a sad disfiguring appearance.

We arrived at Utica about two, and I have borne the six hours better than I expected. The sparks from the engine kept us on alert, and poor Anne. From her gingham never having been washed, I suppose it was more tinderish than my sister’s and mine. It is sadly burned at times with all our care, it was in a flame and the damage almost precludes repairing. It was too warm to keep the windows closed to prevent this annoyance. The thermometer is not more than 82.  We went to look at the boat which is to convey us tomorrow on the Erie Canal to Syracuse. They are not so large, or least the cabins, as the Booth Boats—it felt close and hot, but Madame was promised a mattress and the best places.  We shall be at least 12 hours on the passage if we go to Syracuse. Hopefully we shall stop at some of the towns on the banks.

9th I had not a very good night, but no hesitation in breakfasting at 7 am, and we were in the boat at half-past. Very few passengers appeared–no females.  We had the Ladies’ Cabin to ourselves, with only the exception of the stewardess.  I felt squeamish all day, being chiefly through magnificient woods, I might say forests. We were determined to go through the night so we did not stop at Syracuse where we arrived about nine. The seats opening in our Cabin with mattresses laid on them, made comfortable beds for the night–we did not undress more than putting on night caps and dressing gowns. We had some locks to pass, which occasioned noise and some disturbance–but I believe we had all some comfortable sleep.

10th I was ordered to rouse soon after 5am so that the beds might be stowed away and the cabins readied for breakfast. We arrived at Rochester about 9–very disagreeable, disembarking at night with our various packages. The Eagle is a very large Hotel.

11th. Breakfast at the public table at seven. Set out on a railway to join the Packet on Lake Ontario, for the distance to Lewiston. As we have the wind against us, it will occupy 14 hours. Dined at the public house a large party–the accommodations very good, very superior to English Packets. Sat most of the day on the deck of the ship.  We arrived at Lewiston nearly in the dark and the hotel was at some distance from the landing. I should remark that town of Rochester is very considerable and with handsome streets, though in 1812 it was only a few houses in the wilderness.

The following day the family went to visit the falls “on the railway drawn by horses.” On July 13 they crosse to the Canadian side “in a rowing boat” which took but five minutes.  Mrs Langdon did say however, that they got a little wet from the spray from the falls.

14th  We had one of the stages to ourselves to Queenston, where we were to take the Packet for Toronto.  Dined there, and embarked about 2. Had a nice cool sail, but noting the land is so far away, scarcely visible till we came in sight of the city. It appeared flat and aguerish.  Our road to the Hoel, on a wooden foot-path, with unpaved street, give one at first a poor opinion of the Captial of Canada. Our reception at the Hotel was most uncomfortable, as we were shewn into a little dirty, unbenched room, and the lodging rooms offered were up some stairs over the yard.

The family remained in Toronto for a time seeing the sites, departing on August 4.

4 Though I was still weak, we embarked about 10 o’clock in the evening in the steam packet for Port Hope.  No sleep during the whole night. At 6 o’clock we disembarked and went to a disagreeable damp old inn for breakfast, and found we had some hours to wait for the stages, which were to convey us for about nine miles to Rice Lake. But we had a most agreeable specimen of Canadian hospitality from Captain Kinsmill. 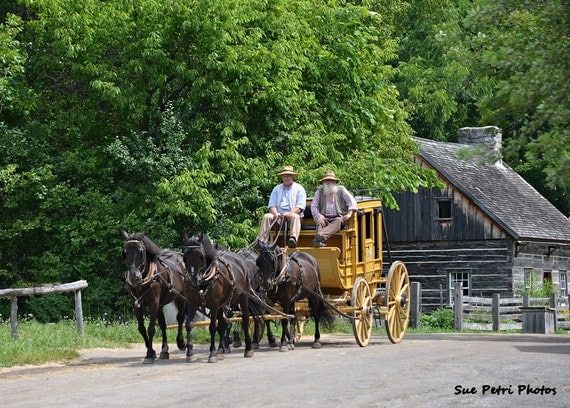 The stage is a kind of wagon with two seat slung across, the back bound with buffalo skin, and over good roads would not be an unpleasant carriage. Some part of the road was good, other parts very shaking and uneasy, but no corduroy. We had two hours to wait for the steamer, which we tried to make less tedious by botanizing a little. The day was beautiful, not too hot  yet bright. At last we saw a ponderous body slowly approaching us–it was certainly the most uncouth steam packet we had ever seen–its machinery of bad construction, and of slow motion.  We dined on board, a comfortable clean dinner with few people. I was glad to get a sort of bed made up on a table with our pillows, bags, etc for I began to be worn out. It was quite dark before reaching the place of disembarking, and we had to be rowed up river about a mile before reaching Peterborough.”