As tombstone photos are added to this page, click on the thumbnail photo or the name beside it to open a larger picture.  All photos are copyright Norma Gillespie, unless ‘used with permission by another named photographer.

The Town of Collingwood is in Simcoe County and sits right on the shorelines of Georgian Bay. But just west of it is the  old Township of Collingwood, which is in Grey County and is now called The Town of Blue Mountains.  Very confusing at first to any researcher, including myself in the beginning.

The death of of Mr Alexander Gillespie, which occurred on Wednesday, July 5th, 1916 came as a great shock to his many friends in Nottawa and surrounding country. Though it was known that he was ill for a short time before, it was not thought by his family that the end was so near; yet in spite of medical aide or loving hands, he passed away. The deceased was born in Islay, Scotland. In 1841 he came to Canada with his parents the late Donald and Mary Gillespie, when he was seven years old.  With them he settled on Lot 30, on the 11th Concession of Nottawasaga, part of which he owned at the time of his death. Some years later, he purchased land on the Manitoulin Island where he resided for four years; after which he returned to Nottawasaga and purchased the home near Nottawa, where he remained until his death. Mr Gillespie married Miss Euphemia McNeil,, daughter of the late Malcolm McNeil of Fullarton Twp. The couple had one son, Harman and one daughter Miss Mary, who survive him.  In politics the deceased was a Liberal and in religion a Baptist. The funeral which took lace on Friday from the family residence, to the Presbyterian Cemetery in Collingwood was well attended.” (a second record in next entry)

Alexander Gillespie, born Islay, Scotland 1843, immigrated to Canada with his parents, Donald & Mary, at age 7, and settled on the 11th Concession of Nottawasaga. He married Miss Euphemia McNeill of Fullarton Twp. One son Harman, one daughter Mary. Died Wed, July 5, 1915. Buried in the Presbyterian Cemetery, Collingwood. Annie Gillespie at Creemore Aug 30, 1883, relict of the late Angus Gillespie, in her 85th year of her age, Simcoe Co, Ontario Gene Mildred Gillespie Passed away suddenly on Sunday November 23, 2014 at the General & Marine Hospital, Collingwood in her 86th year. Gene of Wasaga Beach, beloved wife of the late Ralph (2008). Loving mother of David and his wife Carolyn, Mike and his wife Gail and Jill and her husband Duncan Pletch. Dear grandmother of Lisa, Martin, Andrew, Matthew, Elizabeth and Kaitlin. There will be no public service at Gene’s request. A private family memorial service will be held at a later date. Arrangements entrusted to Carruthers & Davidson Funeral Home – Wasaga Beach Chapel

Mary Gillespie died in Penetanquishene May 2, 1908

Gillespie: Sept 1862 “Missing: On Wednesday evening last, a person named Gillespie, who worked for Mr George Webb Cooper, left this town in a small boat to go to Mr Welss on the Indian side of the bay, since which nothing has been seen of him. The boat was discovered some distance down the bay with her said set. It is probable that the unfortunate man must have fallen overboard and been drowned.”

Malcolm Gillespie, at home in Sullivan, died on the 11th Feb, aged 16; and on the 12th of Feb Ranold Gillespie, age 22.( Information listed prior to April 1875, so may have been that year).

Robert Gillesby of Woodford, drowned off The Jane Miller. Dec 16, 1881 (history of ship) 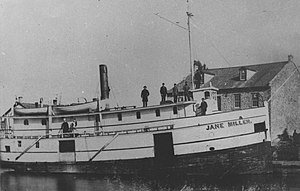 Russell Gillespie, body recovered March 1918 (the record source does not make it clear if this was in Simcoe or Grey County. Published in Collingwood Saturday News, Meaford Express.

William Gillespie, missing World War II, July 27, 1944. s/o Mrs W. L Gillespie. He was a member of the RCAF bombing squadron. His father was killed in action in 1916. Thornbury, Ontario – (Note: His name is inscribed on a memorial plaque beside Highway 26 at the main intersection in town). Author’s Note: Mrs Marjorie McKee of Guelph met me in Erin years ago to walk the cemetery and drive around the area to see the farm of Robert Gillespie where the family was raised, and gave me the background history of this family line to which she was related. Deep sadness to see another Gillespie researcher laid to rest. Marjorie’s story was published in the Gillespie Family History Newsletter Summer 2002. A good reminder that all these names on this page represent lives that were lived and stories to be told.. See her photo with tombstone of Robert Gillespie

Died at Rosebank, North Dumfries on Monday, 7th of April, 1884 at 4:15 oclock. Isabella Gillespie in her 37th year of age. Funeral will take place from her brother’s residence on Thursday, April 10 at 1 o’clock pm. To Galt Cemetery. Service commences at a Quarter to One. Friends and acquaintances are respectfully invited. Waterloo. April 11th, 1884.

Died at Ellerslie, North Dumfries on Friday, 9th October at 11:30 pm. Isabella Gillespie, relict of the late Hugh Wallace in her 77th year. Funeral on Monday afternoon, Oct 12th at the quarter past 3 from her late residence. To Galt Cemetery. Friends and Acquaintances are respectfully invited to attend, North Dumfries, Waterloo Co Oct 10, 1885.

Died in Galt, on Monday, the 25th instant, John Gillespie Sr, aged 66 years and 9 months. Funeral will take place on Thursday next at 12 o’clock from his late residence, Rosebank Farm. To the Public Cemetery, Galt, November 26, 1872.

Died at Ayr on Tuesday, Dec 29, at 5 o’clock am, Mary Auld, relict of the late Samuel Wallace, aged 68 years. The Funeral will take place on Friday, January 1st at 1 o’clock pm from the residence of her son-in-law Mr Jos Gillespie, Northumberland Street. To the place of internment, New Cemetery, Ayr. Friends and acquaintances respectfully invited, Ayr,  Dec 29, 1885.

Jack Stephenson Gillespie. At his home on Sunday, Jan 13, 2002 in his 82nd years. Jack Gillespie, beloved husband of Nora Gillespie, Brantford. Proud father of Bryan Gillespie & Heather, Port Dover; Andrew & Wendy Gillespie, Pickering. Loving grandfather of Matthew, Mark, Kirstin and David. Dear brother of Marian Malliot and Velma Jean Gray, both of Woodstock. Jack was a member and treasurer of St Paul’s Anglican Church, member and former treasurer of the Grand River Kiwanis Club, was treasurer with the P.U.C. for 32 years until his retirement, treasurer of the Cancer Society for 28 years; treasurer chairman  of the Brantwood Residential Development Centre, member of the  Board of Governors of Brentwood; was a former member of the Masonic Lodge, Innerkip. He was paymaster of the 56th Field Regiment, was a captain and served overseas in the R.C.A.F. Friends received at the McLister Funeral Home, Brantford. Funeral service on Wednesday at 11:00 am.Internment at the Innerkip Cemetery at a later date.

Jean Gillespie died in her 60th year 2019, predeceased by her parents, Graham & Ann Gillespie. She is survived by her sister Kathleen (Arthur)Zymerman and partner Mario Rojas. Fondly remembered by her nieces and nephews: Jeremey (Georgina); David (Emily); and Jessica (Jerrid) and her great-nieces and nephews: Connor, Wyatt, Logan, Rosyln, Benjamin and Lucas, as well as by her uncle Eugene Bowles.Funeral at Ward Funeral Home, Brampton Chapel on Wed, Nov 6, 2019. Cremation to follow.

1847 as a terrible year for families in the loss of so many children.

Erected by James Gillespie to the memory of his much lamented brother, Henry, who died on the 22nd of December, 1847 aged 16 years.  Innerkip Cemetery.

In memory of Jessie, eldest daughter of Joseph & Margaret Gillespie, who died on the 19th day of November, 1881 in the 63 year of her age. Buried Innerkip Cemetery, Oxford County, Ontario

Gillespy – Hamilton Cemetery (next to grave of M A Gillespie)

Robert Gillespie 1805-March 21, 1841, aged 34 years.  Killed in a hunting accident, Old Union Cemetery, Dundas, Wentworth Co (This was the first public cemetery in Hamilton, opened in 1831. It filled up in 20 years, and was closed in 1864.) 2nd record: 7 April 1841: On Tuesday, 25th ult, Robert Gillespie of Dundas was accidentally shot while on a hunting excursion. He was a native of Westport, Co Mayo, Ireland; for the last six years he worked in the shop of James Smith, tailer of Dundas. His mother and youngest sister reside at Newport Pratt, Co Mayo. (Published Hamilton Journal, April 2nd) At Walsingham on 9th January, 1835, John Monroe, only child of William & Harriet Gillaspy in his 19th year. In his removal, affectionate and kind parents have lost an obedient son, and the Church militant robbed of one of its members….about four years ago he was brought from the bondage of sin…and shortly after united himself to the Church of Christ…from which he was called two years after the fist attack of the disease, which terminated his earthly existence, the consumption….(details of his religous faith here). Burial Monroe/Gillespie Cemetery. Report in the Christian Guardian for March 4, 1835.

Includes the City of London.

Gerald Archibald Gillespie, internment June 23, 2006, Woodlawn Cemetery, London, Middlesex Co, Ontario. No tombstone found. Section H – 130.  (Note: I believe this man was a Gillespie researcher from Kent County with whom I corresponded many years ago. He was an descendant of Isle of Islay Scots who immigrated to Upper Canada in its pioneering years). Note: All Gillespie burials in both Woodlawn Cemetery and Mt Pleasant Cemetery in London visited August 2020. Both cemetery offices provided listing of all Gillespie graves with internment dates .l walked these huge cemeteries looking for tombstones by section,  as that was not indicated. 30 Gillespie grave sites at Woodlawn and only two at Mt Pleasant. Thank you to very helpful staff.  I met five deer grazing among the tombstones  and not sure who was more surprised.  Quite tame as I later met one  lying down who just watched me pass by.

Gerald A Gillespie, of RR 1, Highgate, and formerly of London, passed away at Four Counties Head Services, Newbury on Friday, March 30, 2001 in his 64th year. Son of the late Ian Hugh and Isabell (Campbell) Gillespie, survived by three children: Debbie and Brian Chandler of Chatham; Currie and Cathy Gillespie of Winnipeg; and Blair Gillespie of London. Also survived by two brothers Peter and his wife Pat of London, and  Neil and his wife Majorie of Thamesville. Fondly remembered by his cousins Margaret and Jack Eberle of RR 1 Highgate, with whom Gerald made his home for the past three years.  At Gerald’s request, there will not be a service and his body has been donated to medical research. Arrangements by Arn Funeral Homes, Glencoe. Published in the Thamesville Herald, Wed, April 11, 2001  [His burial Middlesex County, City of London]

Note: Mr Gillespie was very active with the Ontario Genealogy Society. We  had arranged to meet so he could take me around the county to show me the Gillespie  burials and histrory of the pioneers,  many of whom were Islay folk from Scotland, when the news reached me of his sudden death. A great loss to the genealogy community because of his knowledge of the history of that area and especially of the Islay pioneers to the region.

For those living in Ontario, the Collingwood Public Library has a collection in print of almost all Ontario cemeteries, most of them indexed and prepared by members of the Ontario Genealogical Society. These volumes are also available for purchase from the Society. This Library has all Gillespie records from these volumes which are being added to this website. Current obits from about 1990s  to today can be found on several websites but those burials are not included in these volumes. See also the Ontario Cemetery Finding Aide

(Thanks to the volunteers at Barrie Public Library who have a wonderful collection of records for Simcoe Co, and to the Simcoe Archives,  who hosted a reunion for those researching Isle of Islay, Scottish folk.)

Computer have a mind of their own. Frustrations when tombstone photos don’t stay in line, Looks perfectly fine as I load them, but voila a touch of rebellion by this impish monster.